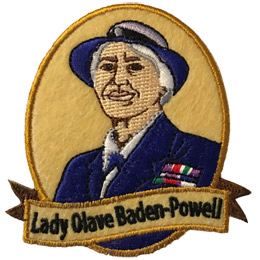 Olave became Chief Guide for Britain in 1918. She was elected World Chief Guide in 1930. As well as making a major contribution to the development of the Guide / Girl Scout movements, she visited 111 countries during her life, attending Jamborees and national Guide and Scout associations.

Olave was educated by her father, her mother, and a number of governesses at home. She lived in seventeen homes in the first 23 years of her life. Olave became keen on outdoor sports including tennis, swimming, football, skating and canoeing, and also played the violin, her first violin she called Diana. It was a copy of a Stradivarius made by Messrs. Hill for the Paris Exhibition and many years later it was presented to the Guide Association.

In January 1912, Olave met the founder of Scouting, Lord Robert Baden-Powell on an ocean liner (RMSP Arcadian) on the way to New York to start a Lecture Tour. She was 23, he 55, and they shared the same birthday. They became engaged in September of the same year, causing a media sensation. They married in secret on 30 October 1912 for privacy.

The Scouts and Guides of England each donated a penny to buy the Baden-Powells a wedding gift of a car. Olave's father helped them buy a family home where she lived with her husband from 29 January 1919 until 25 October 1938.

The Baden-Powells had three children:

Olave and B-P moved into Ewhurst Place, in Sussex in April 1913. In June of that year, the 1st Ewhurst Scout Troop was inaugurated. Olave was the warranted Scoutmaster of this troop, assisted by the family's housemaid and the gardener. Olave accompanied Robert on many of his Scouting tours and to events. In 1915, the Baden-Powell's bought a small car, and after learning to drive, Olave often drove him to engagements.

Although most famously connected with the Girl Guides, Olave's first offer to help them in 1914 was turned down. The Girl Guide Movement had started following pressure from girls who wanted to become Scouts; the Movement was set up by Robert Baden-Powell and his sister Agnes Baden-Powell, but was not progressing well. After a reorganisation in 1915, Olave again offered to help, and she started organising Guiding in Sussex and in October 1916, the Commissioners requested Olave take the role of Chief Commissioner.

Having suffered a heart attack in Australia in 1961, she was finally banned from travelling by her doctor at the age of 80 in 1970 when she was diagnosed with diabetes from which she eventually died.

Olave died on 25 June 1977 at Birtley in Surrey, UK. Her ashes were taken to Kenya to be buried in the same grave as her husband's remains. She was survived by her two daughters, her son having predeceased her.

Scouts and Guides mark 22 February as B.-P. Day or Thinking Day, the joint birthdays of Robert and Olave Baden-Powell, to remember and celebrate the work of the Chief Scout and Chief Guide of the World.